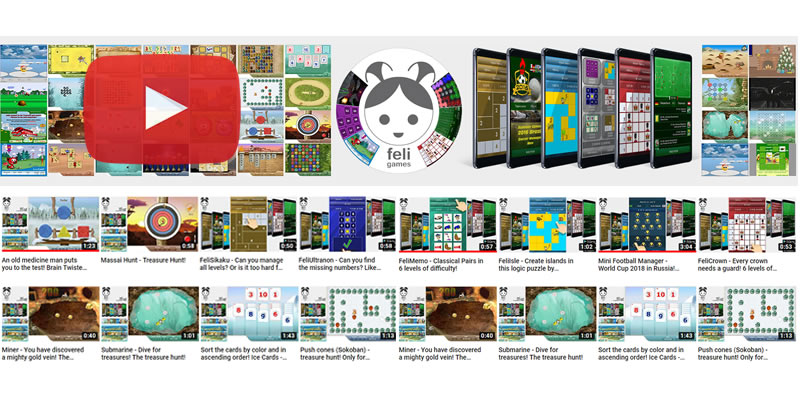 Welcome to the FeliGames.de YouTube channel! Here you will find logic games like Sikaku and Match 3, number puzzles like Sudoku and 15-Puzzle, card games like Solitaire and Spider, Football Manager EM16 and WM18 for mobile phone, tablet, notebook and PC. Train your logical thinking, reaction and dexterity through varied mini-games!
FeliGames-YouTube-Chanel

Put the number blocks in the correct order. Use the free space to move the blocks until the order is established from 1 starting line by line from left to right and from top to bottom. The empty field is located at the end in the bottom right corner.
YouTube-Feli15Puzzle 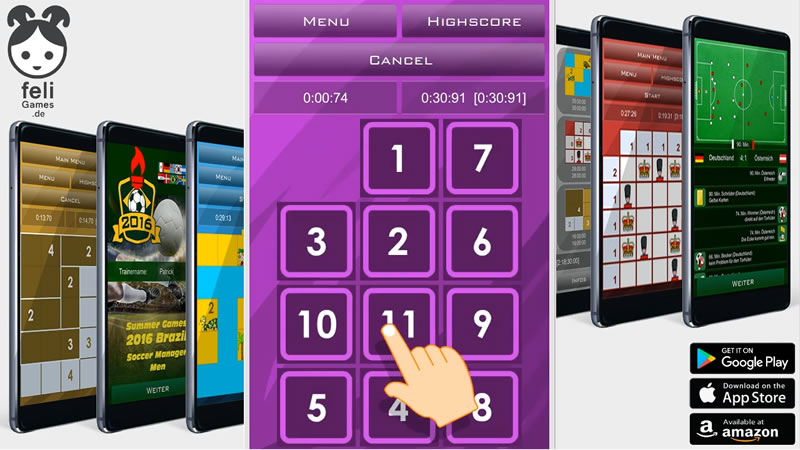 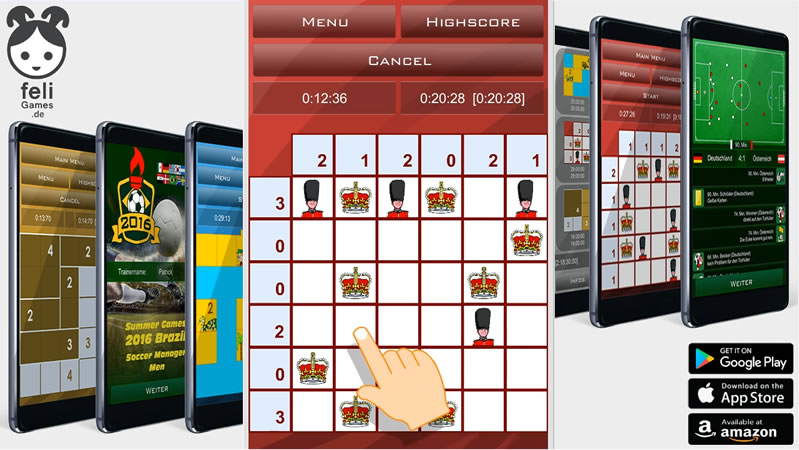 Every crown needs a guard! Protect the crowns and put one guard at each side. The numbers on the left and top indicate how many guards there are in each passage.
Tip: A click on an empty field places a guard there, another click removes him.
YouTube-FeliCrown

Mini Football Manager - World Cup 2018 in Russia! Get the cup! Here you determine the outcome of the 2018 Football World Cup in Russia! Choose one of the 32 national teams and take on the role of coach! Make all the important decisions, choose the right tactics, optimize your line-up and take care of your players!
YouTube-WorldCup2018 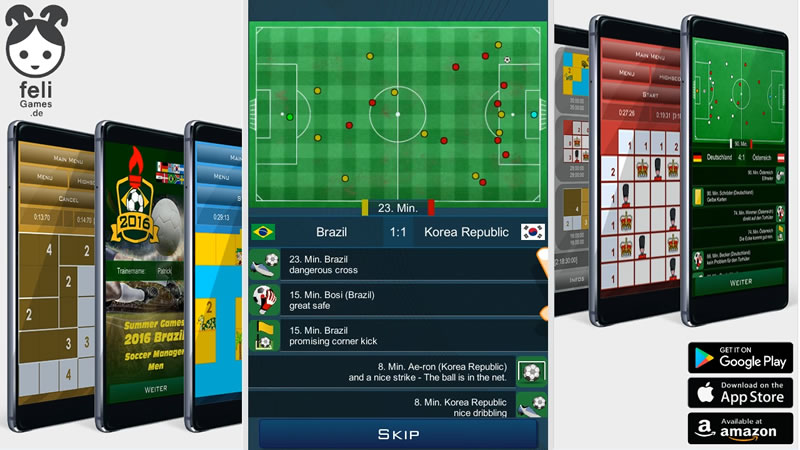 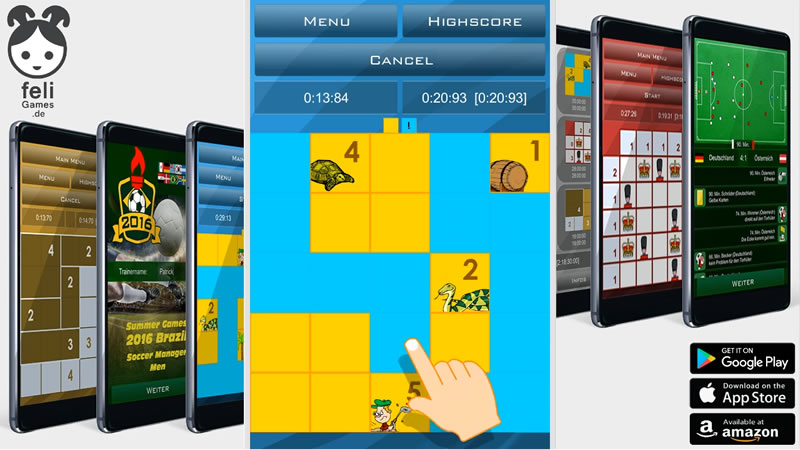 FeliIsle - Create islands in this logic puzzle by uncovering the waterways! Each island consists of a given number of fields. Tap a yellow land field to turn it into a blue water field and vice versa. The goal is to separate all islands from each other and to connect all waterways horizontally or vertically.
YouTube-FeliIsle

FeliMemo - Classic temporary MemoryÂ® in 6 levels of difficulty. Turn two cards over and find identical image pairs. Remember the remaining cards until the matching pair is revealed. You can quickly uncover multiple cards in a row to view them. A pair of two identical cards will only remain uncovered if they are clicked one after the other.
YouTube-FeliMemo 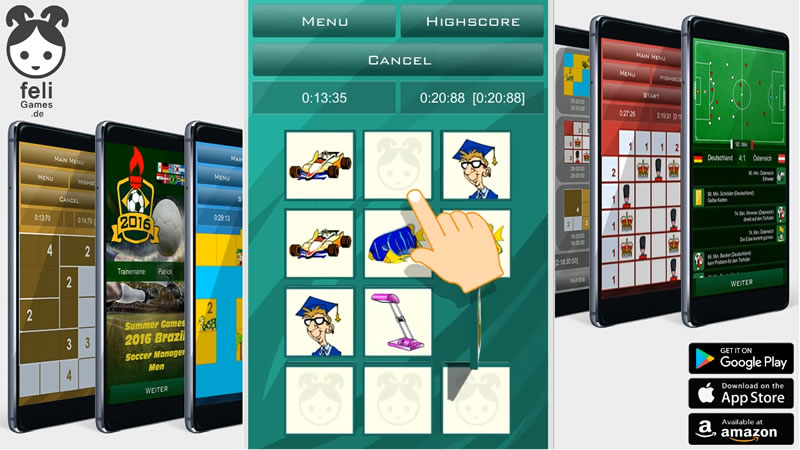 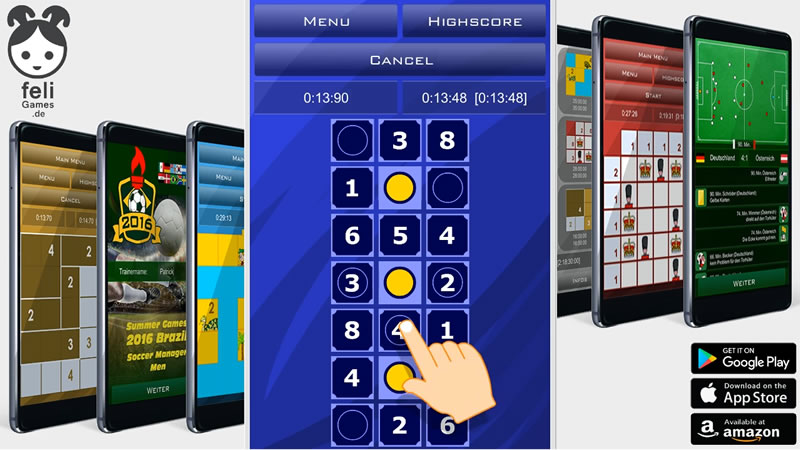 FeliUltranon - Find the missing numbers! Like Sudoku and yet different!
Each core is to be surrounded with numbers from 1-8, they may not repeat themselves in the square around the yellow core. Use the overlapping fields of several cores to add the missing numbers in the exclusion procedure.
YouTube-FeliUltranon

FeliSikaku - Can you manage all levels? Also known as Shikaku!
Fill the entire field with rectangular blocks. The number in a field indicates how many fields a block consists of. Colour the whole board until no white board is left.
Each number must be in a game block that consists of exactly as many squares as it is supposed to.
YouTube-FeliSikaku 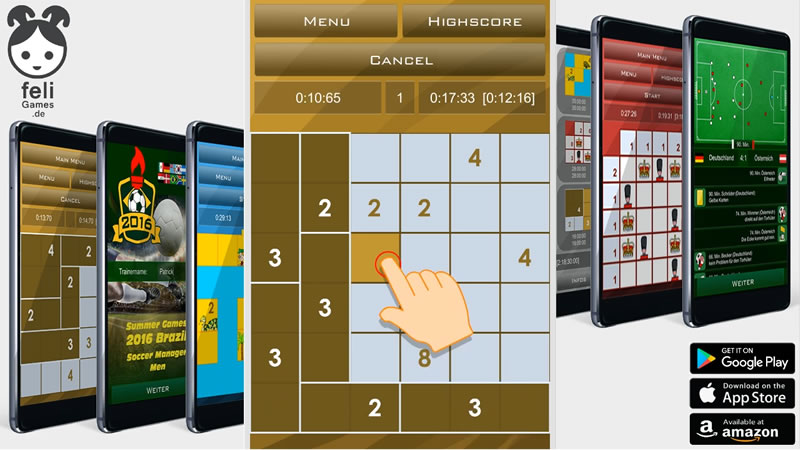 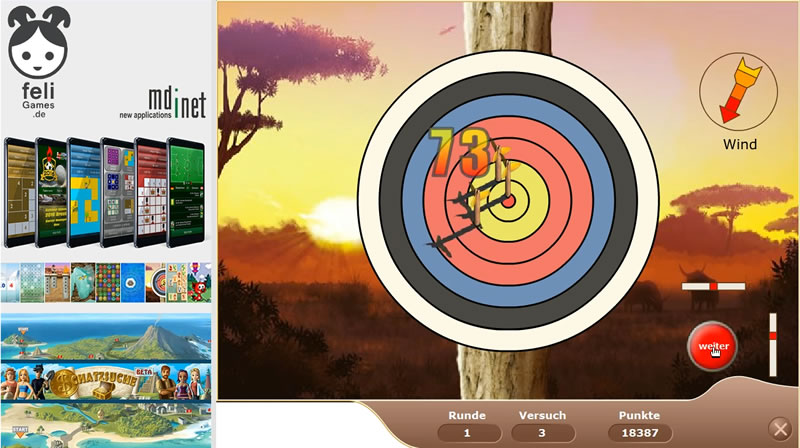 Massai Hunt - Treasure Hunt! Want a little warm-up exercise before the big hunt?
Try to align the two aiming aids on the crosshairs in such a way that you hit the exact middle despite the wind. Wind direction and wind force influence the trajectory of the arrow and are decisive for your success - let them flow into your calculations.
YouTube-Massai-Jagd 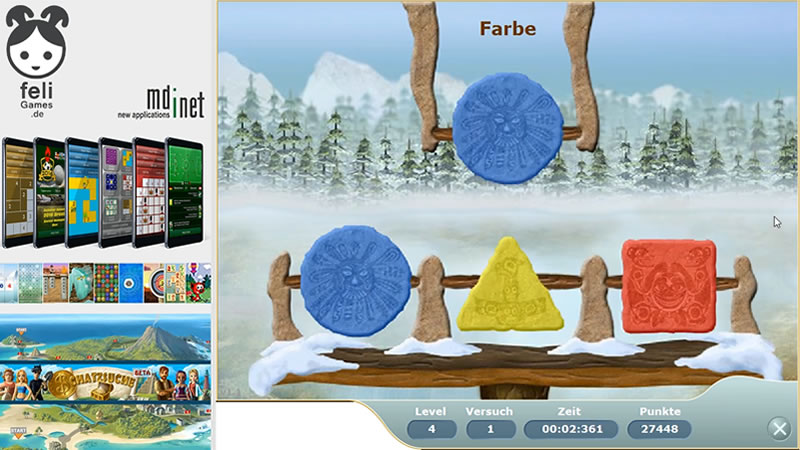 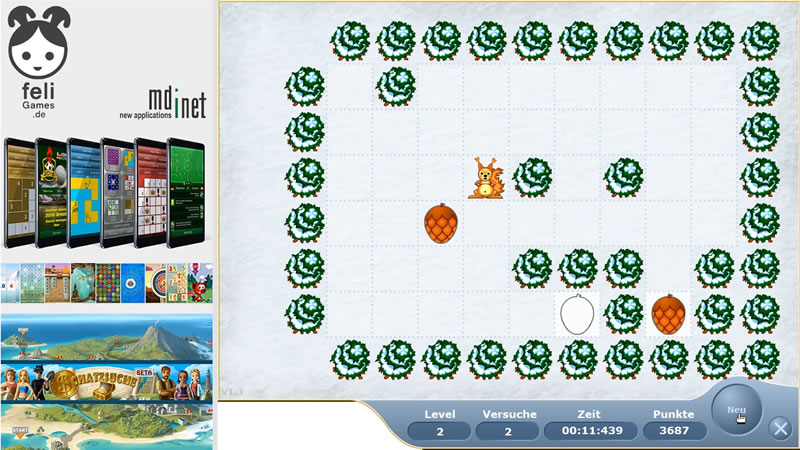 Zapfenschieben (Sokoban) - Treasure hunt! Only for professionals! Winter is particularly severe in Arctic regions. Collect as many fir cones as possible for your little squirrels! But beware: you can only push them, not pull them. Start the game with the start button. Then use the arrow keys to control the game.
YouTube-Zapfenschieben

Sort the cards by color and in ascending order! Ice Cards - The Treasure Hunt! You can sort single or connected cards from one pile to another - but only if they match! Cards lying on top may be picked up and parked on free storage spaces.
YouTube-Eiskarten 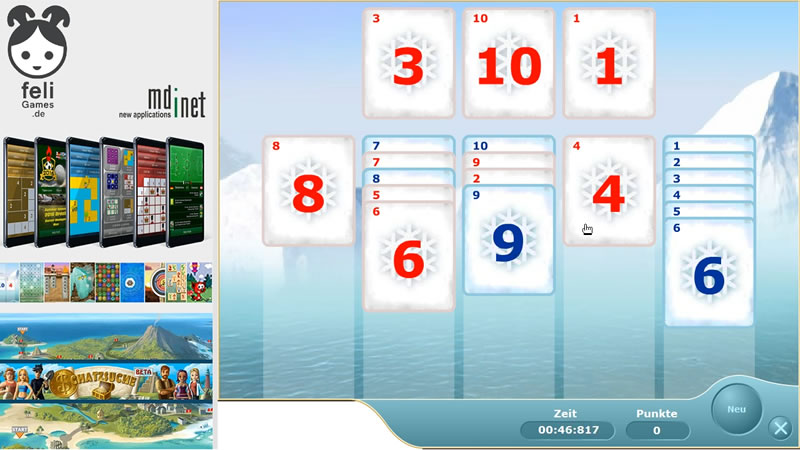 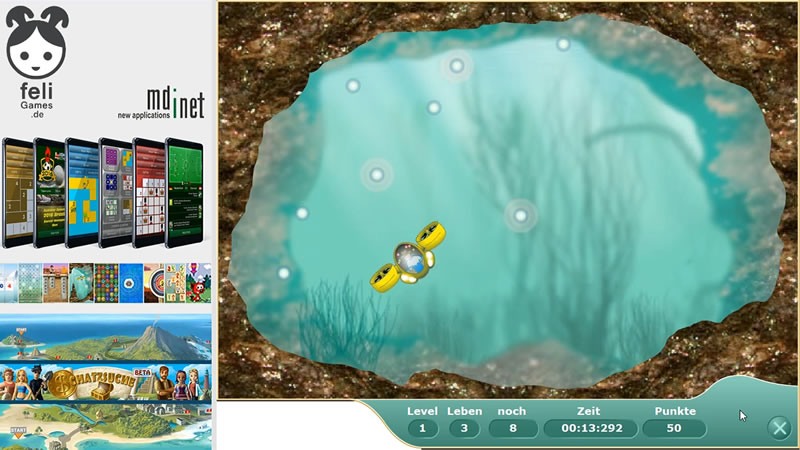 Submarine - Dive for treasure! The treasure hunt! Treasures lurk also under water. Collect all the gems with Dakota's help, but make sure the sub doesn't sink to the bottom and touch the rocks, otherwise it will shatter. Use the arrow keys to steer the sub through the caves.
YouTube-U-Boot 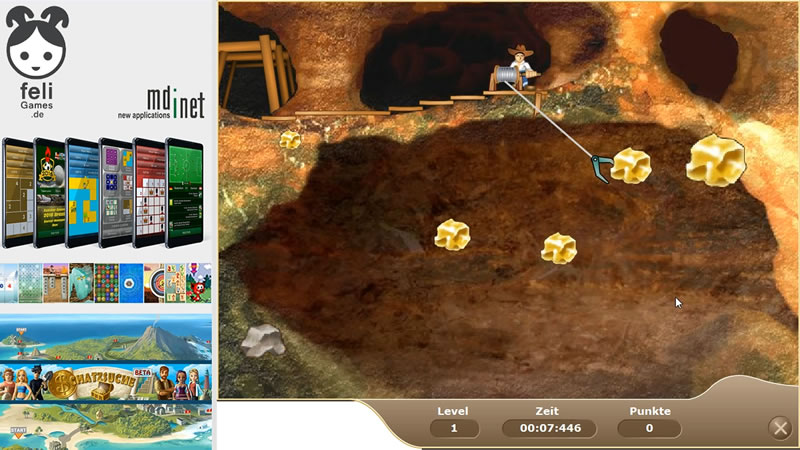 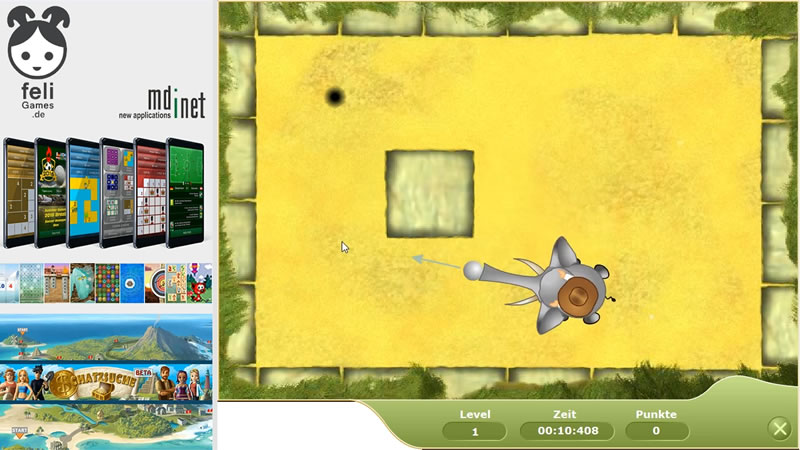 Can your elephant golf like that? - The treasure hunt! Try to push the ball into the hole as fast as possible! But not too fast, otherwise you will shoot over the target. Then aim precisely and determine the direction with your mouse. Keep the left mouse button pressed until you have enough power for the shot. Release the mouse button and hope you hit.
YouTube-Elefant

How good are you at Halma? - The treasure hunt! Clear the playing field! At the end only one stone may remain. Then click with the left mouse button on the stone you want to place and jump horizontally or vertically over another stone onto an empty field. How fast can you clear all the squares?
YouTube-Halma 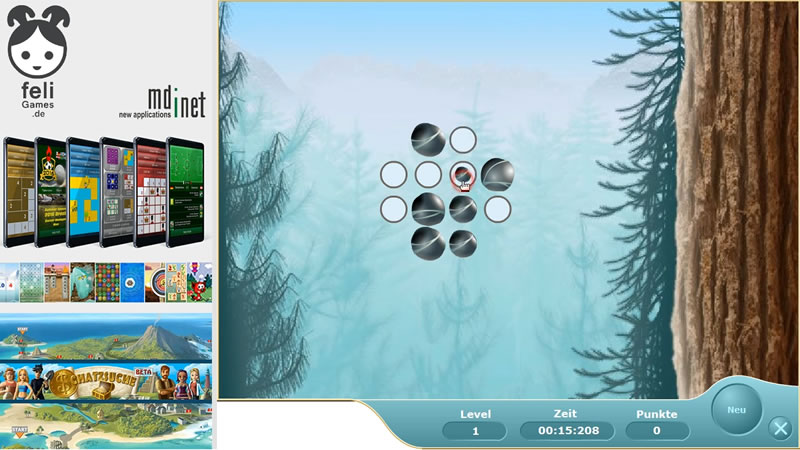 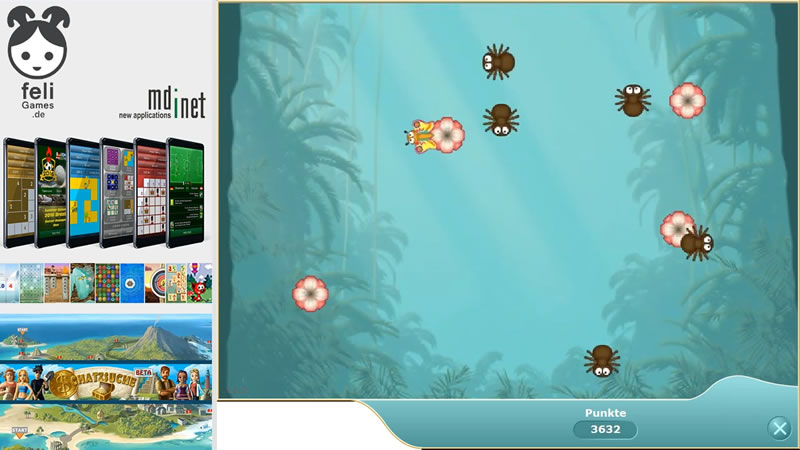 Give those annoying hamsters a proper lesson! - The treasure hunt! The cheeky savannah hamsters show up in your territory and get on your nerves. You have to get rid of them - with the wooden hammer method! Meet as many hamsters as you can and drive away the cheeky beasts!
YouTube-Hamster 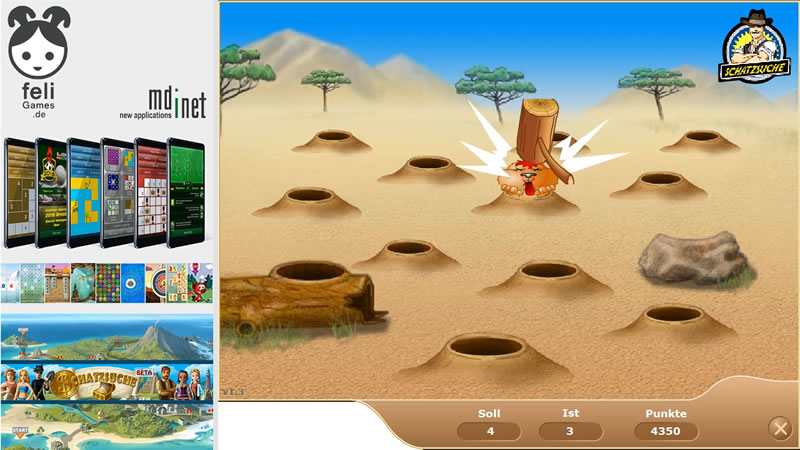 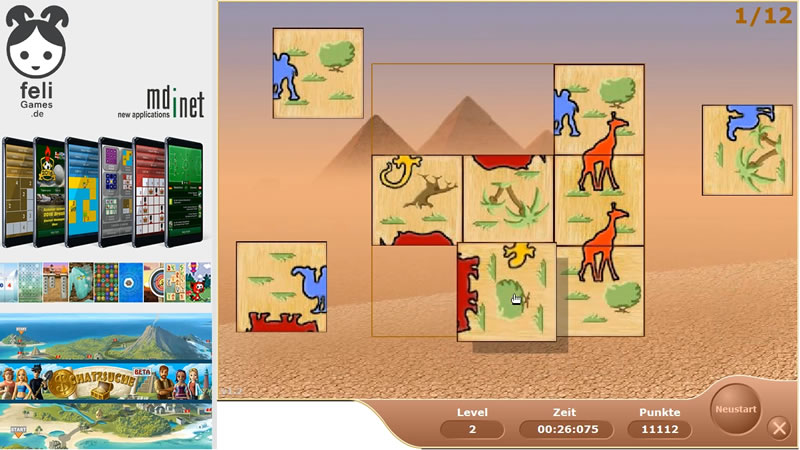 Will you be faster than everyone else? Puzzle - The treasure hunt! You have to put the pieces together and make sure that the right pieces are in line. Then drag the puzzle pieces with the mouse to the right place and turn them clockwise by clicking on them.
YouTube-Puzzle

Lay the Right Cards - The Treasure Hunt! Sort the cards in ascending order and by color. Place the cards in the target boxes at the top right. Start with the [1].
To help you, you can pick up the cards individually and place them on any of the four storage boxes.
YouTube-Karten 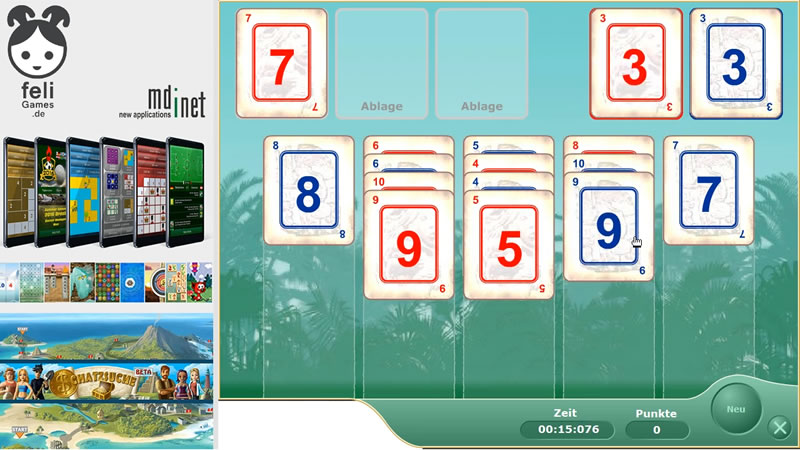 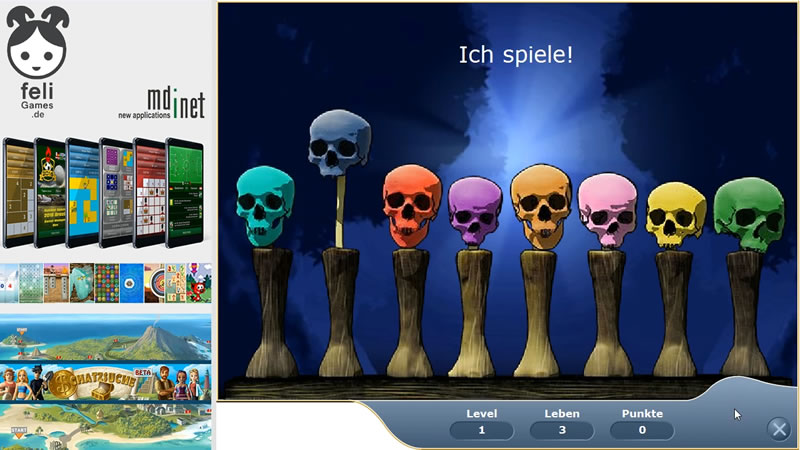 Defeat the Voodoo Champion at Voodoo Pipes! - The treasure hunt! The Voodoo Master plays you a melody. Listen carefully, memorize the tones and play them back exactly! If you play the wrong notes, you'll scare off the Voodoo Master and lose the game. Wait until the master is finished and then click the respective pipes in the correct order as quickly as possible.
YouTube-Voodoo-Pipes

Dragon snake collects treasures - The treasure hunt! Collect all treasures with the Dragon Serpent. Make sure you don't steer against the walls, trees or stones - because then you've lost! Then steer the snake with the arrow keys. When you reach the portal, you start a new yard.
YouTube-Schlange 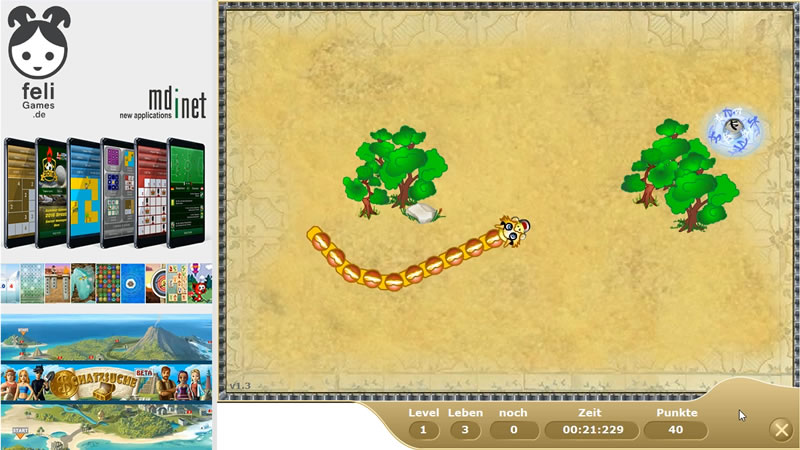